The Art of Peaceful Living
by Allan Lokos 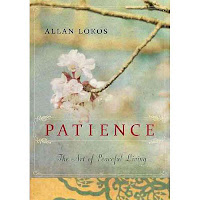 Even though February is well past, I have to mention the book of the month, Patience, The Art of Peaceful Livingby Allan Lokos. I started reading it dutifully, thinking patience isn't one of my issues. But I quickly developed a deeper understanding of the nuances of patience and the need for practice, for all of us. His easy, gentle approach served as a back drop as I burned up my Mac laptop, had a ten day delay for its replacement and then had my heater break in the middle of a cold spell. His wise words and easy pace began to set a new tone for my inner voice. His subtitle, The Art of Peaceful Living, was just that for me. Even today I have a new respect and relationship with patience.
Review by Rev. Ruth Barnhart, a staff minister at Center for Spiritual Living, Santa Rosa
Patience, The Art of Peaceful Living is available at Stepping Stones Books & Gifts
No comments:

An Evening with Lisa and Erika 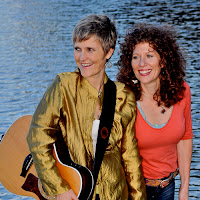 Stepping Stones Books & Gifts invites you
to come and enjoy an evening of music
from Jazz to Rumi and contemporary, too.
Date:  Friday May 3
Time:  7:00 pm
Center for Spiritual Living,Santa Rosa
2075 Occidental Road
“Extraordinary jazz vocalist Lisa Yvonne Ferraro is a soulful original and has one of the most distinctive voices heard today,” said jazz radio personality and founder and president of the Pittsburgh Jazz Society, Tony Mowod.
In 2009, Lisa moved to the San Francisco Bay Area, where she rapidly developed a local following. Her debut at Anna’s Jazz Island in Berkeley was followed by performances with a Big Band at Yoshi’s Jazz Club and at La Peña Cultural Center with Erika Luckett, and she has become a regular at Freight & Salvage Coffeehouse, whose 450 seat theater with world class sound and staging belies its folksy name. Also a producer, she has organized “Diva Nights” in both Pittsburgh and the Bay Area as fundraisers for musicians facing cancer.
"IGNITING HEARTS ACROSS THE GLOBAL FRONTIER"  - Erika Luckett creates a powerful expression of world-inspired music. Poetic and rich, her voice conveys lyrical depth, and her fiery, innovative guitar playing creates an orchestra of sound with only six strings. Growing up in a fluid current of culture, savoring the richness of the Amazon, the urban rhythms of Sao Paulo and the percolating warmth of the Caribbean gave Erika an early appreciation for the interconnectedness of people and cultures.
Cost:  $15 per person.  Tickets will be $20 at the door.

Order tickets now
More information may be found on Lisa and Erika's joint website www.lisaanderika.com
Lisa and Erika have individual websites www.lisaferraro.com and  www.erikaluckett.com
No comments:

Book Review: A Path With Heart

A Guide through the Perils and Promises
of Spiritual Life

I am grateful to be reading this month's book, A Path With Heart. I pulled my old copy off the shelf and was pleasantly surprised.  I had forgotten what a master teacher Jack Kornfield is, both for those new to meditation and seasoned meditators alike. His personal sharing and insight offer a gentle approach to practice that invite us all to look deeper into ourselves, all the while bringing great compassion and understanding to just how human we all are.  Just reading the book opens my heart and settles my mind and inspires me into even greater practice.
Review by Rev. Ruth Barnhart, a staff minister at Center for Spiritual Living, Santa Rosa
A Path With Heart  is available from Stepping Stones Books & Gifts
No comments: